Cancer of the colon and rectum is the third leading cause of cancer in men and the fourth in women. While this form of cancer is often very treatable, you need to know when you are at a high risk so you can take preventative measures.

The colon is a component of the digestive system. It is a long, tube-line organ where waste product is stored after your body has removed the nutrients from it. At the end of the colon is the rectum, next to the anus. This muscular tube, also known as the large intestine or large bowel, is a very important component to digestion.

Tumors of the colon and rectum are common. They often occur on the inner wall of the colon. Many are benign tumors called polyps. However, malignant tumors can also occur here. These are cancerous tumors.

Benign tumors don’t spread. They do not impact other tissue in the body. And, when having a colonoscopy, your doctor can easily remove them. These are not life threatening to you. If these are not removed, though, they can become malignant. In fact, most tumors that are malignant in the colon are believed to begin as polyps.

When cancer is present in this area, it can invade and damage the organs and tissues surrounding the colon. They can break away from these tumors and spread to other parts of your body including the lungs and liver. Then, new tumors can form in these areas. Colon cancer, also called colorectal cancer, can metastasize, or spread, throughout the body. When this happens, it is difficult for treatment to cure the cancer.

Though colon cancer is not uncommon, it is still one of the most important conditions to have treated. We know that colorectal cancer is less common in some areas. It is less common in Asia and Africa. It is most common in Western countries. Western diets are thought to be a key reason people develop this condition.

Colorectal Cancer – How It Happens and How to Detect It 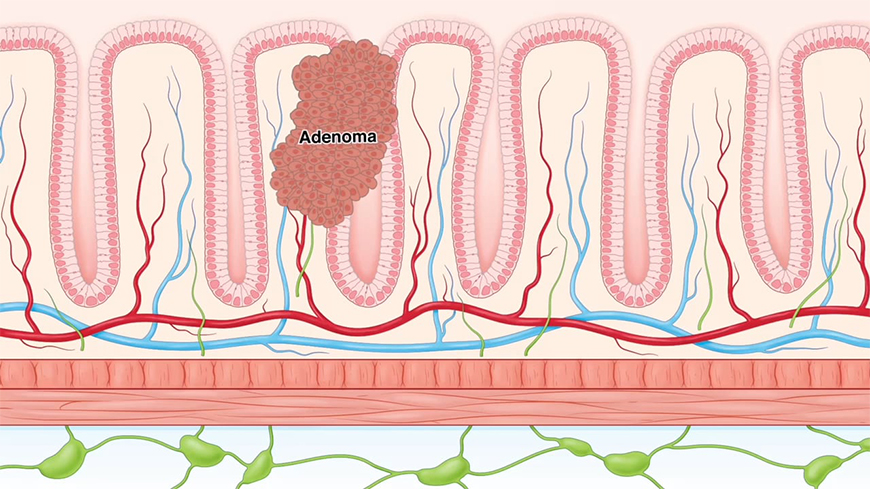 Colorectal cancer is cancer of the colon or rectum. It typically begins as a small benign growth called a Polyp.

Polyps are formed when a stem cell within a crypt of a colon develops into a cancerous cell, often due to a mutation and a tumor suppressant gene APC.

This cancerous cell migrates upward and begins dividing creating a Polyp. Some Polyps will develop into an Adenoma which is a large benign growth.
This is commonly due to a k-ras gene mutation that activates the k-ras onco gene. To supply the enlarging mass, angiogenesis occurs.

As Adenocarcinomas grow, they develop into invasive cancer. Cancer can spread from the mucosa to the muscle layer through the serosae to the lymph nodes and eventually metastasize to other organs through the blood vessels and lymphatics.

The two most common inherited syndromes that can cause colorectal cancer are Lynch syndrome also known as hereditary non-polyposis cancer and Familial Adenomatous Polyposis or FAP.

Lynch syndrome is the most common cause of hereditary colorectal cancer accounting for 2%-4% of cases. It has an autosomal dominant disorder caused by germ line mutations in the DNA mismatch repair genes. By age 50 18% or men and 19% of women with Lynch syndrome develop colorectal cancer, By age 70 it rises to 45% and 54%.

There is commonly a quick progression from Adenoma to colorectal cancer in Lynch syndrome patients. FAP is an autosomal dominant disorder often caused by mutations in the APC gene. It is the second most common cause of hereditary colorectal cancer accounting for less than 1%

FAP can cause hundreds to thousands of Polyps to form in the colon as early as teenage years. Without intervention the risk of colorectal cancer is almost 100%

Flexible Sigmoidoscopy is similar to a colonoscopy but provides direct visualization of only the distal portion of the large intestine.

Fecal Immunochemical test also known as immunochemical fecal occult blood test uses antibodies against hemoglobin to detect traces of blood in the stool. To use the stool sample is placed on the testing device; one or two red lines will appear to indicate whether blood is detected.

FITs are typically sensitive to detect insignificant adenomas and cancer. This is partially due to them being less likely to detect blood from other digestive organs.
DNA stool tests are multi-targeted tests that detect both blood and genetically mutated DNA cells that have been shed by adenomas and cancer into the stool.

According to current US Multi Society Task Force Guidelines surveillance examination intervals are decided by the number, size and histology of the adenomas detected. However recent studies have re-evaluated the long term risk of developing colorectal cancer after base line colonoscopy results.

These studies demonstrate the potential to reduce the number of patients categorized as high risk, optimizing the use and effectiveness of colorectal cancer surveillance.

Symptoms of colon cancer are not specific and they range significantly. They may include:

However, conditions such as irritable bowel syndrome, ulcerative colitis, Crohn’s disease, diverticulosis, and peptic ulcer disease are all conditions that can have similar symptoms. This makes symptom diagnosis difficult.

In most situations, cancerous tumors and cells are present in the body for a long time before any symptoms occur. And, those symptoms will range depend on where the polyps develop. For example, right colon cancers can become very large because the area is more open. They often grow undetected for a long time as a result. These cancers often cause iron deficiencies because they cause a slow loss of blood over a long period of time. This can cause fatigue, shortness of breath, and weakness.

On the left side, which is narrow, cancers tend to cause symptoms sooner because the tumor will impact the function of the colon faster. This type of cancer can cause constipation, narrowed stool, abdominal pain, cramping, bloating, and diarrhea because the colon tunnel is blocked. This may also cause bright red blood in the stool.

When to See a Colon Cancer Doctor

If you believe you are at a high risk of developing colon cancer, or you believe that you may have these symptoms, your Brooklyn colon cancer doctor can help you. There are a number of tests that can be run to offer both preventative treatment and care as well as treatment for existing polyps. Colonoscopies are one of the best ways to do this. These are procedures that are used as a preventative tool to help check the health of the interior of the colon. If and when there is a concern related to cancer, such as the presence of a polyp, doctors can immediately remove it for further investigation. If larger tumors are found, we can then take steps to treat it through the proper means.

It is recommended that individuals who are over the age of 50 have a colonoscopy. Treatment of polyps is easy and highly effective. It can prevent the onset of colon cancer in many people. When you come in to see our gastroenterologist at our Cobble Hill or Ocean Parkway office in Brooklyn, NY, we’ll work with you to better understand your risk factors for this condition as well as when you should have a colonoscopy to look for any signs of this condition. 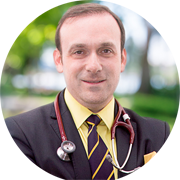 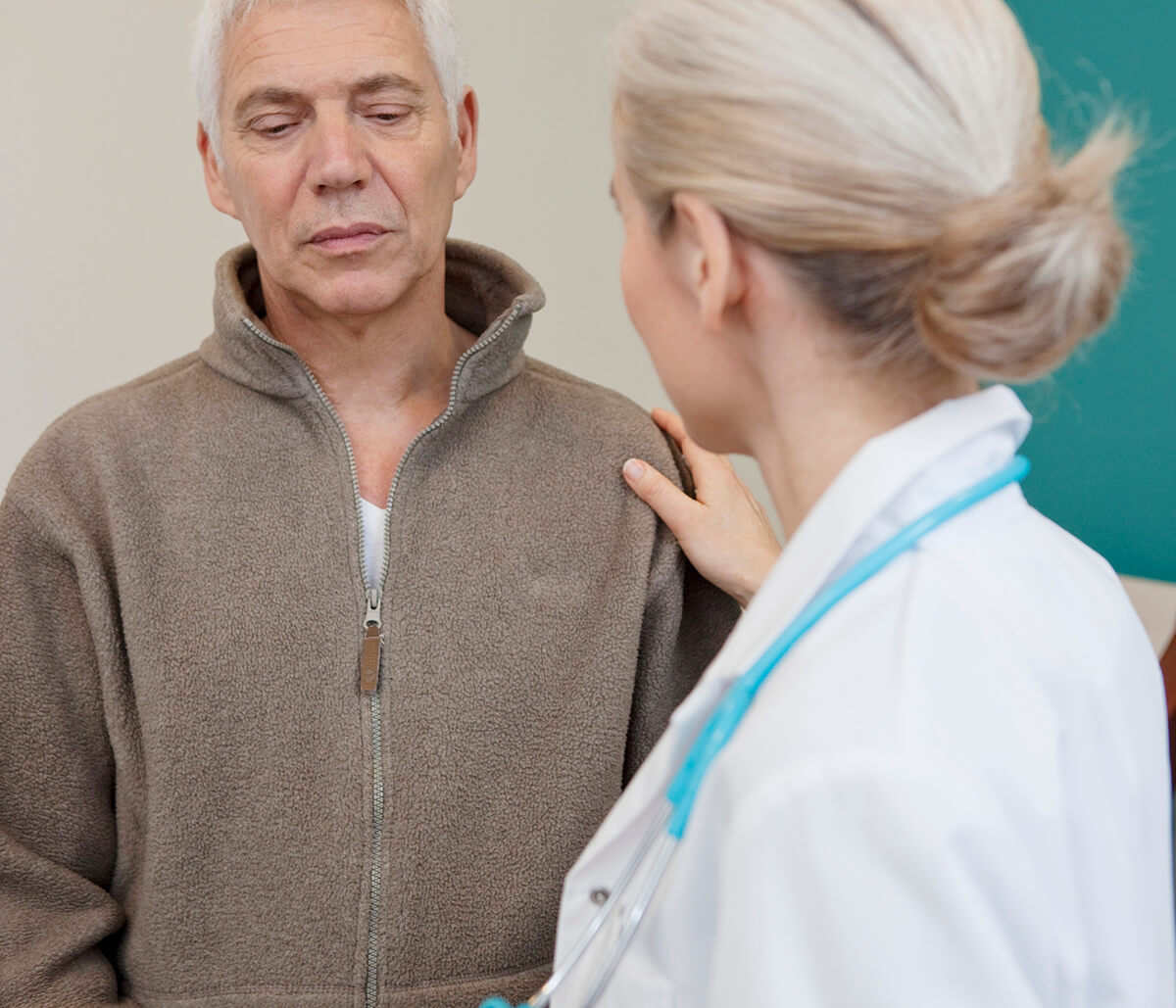 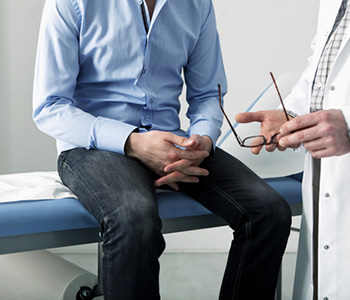 Are you at risk of early-onset colon cancer? Specialist in Brooklyn NY offers effective preventive services

Symptoms of colon cancer explained by a gastroenterologist in Brooklyn